The City Of Nanjing, (above) modeled and animated for the scroll

​The Yangtze River Scroll
In late 2014, an old Friend and established Chinese artist Liu Si contacted me and said that she was doing a Chinese government project: a massive photoshop matte painted scroll for exhibition. It would be 2 meters high by 180 meters wide, and would be presented on this very long screen by as many as 45 projectors operating in sync. She asked me if I could direct not only my team in Wuhan, but another team in Shanghai to bring FX animation to her hand painted scroll and bring it to life. I would also composite and do the effects for all the animation and effects sequences that my company was handling directly. In all there were about 10 area sections of the Yangtze that she was painting: Starting with Tibet, Languay at the source of the river, on down through many cities and gorges, past waterfalls, fisherman, watercraft and so on – past the large cities of Wuhan, Nanjing, Suzhou, and ending finally at the Pacific in Shanghai Each section consisted of creating a 2 looping joined screen image that were a total 4937 x 768 pixels, so that the Tibet/Languay section that I am showing here was made from 4 of those sections. You might imagine the complicated logistics involved in joining all the sections together to match seamlessly.
What was animated and composited? A short list: All background clouds, sun-ray effects, mists, character and creature animation, flocks of birds, water ripples, kites, planes, boats and their wakes, smoke. In short; anything that moved. As well as all of this animation (modeling, animating, effects and compositing); Liu Si was running to tightly on her deadline, and also asked us to build the entire cities of Sushou, Nanjing, and Shanghai 3D so that she could composite them into her painting – as a prequel to the animation work. We took this part of the project on in rush mode – as she had a tight deadline on a shorter version of the scroll in Korea, and so we built many hundreds of buildings, boats, cars, trees, etc. Each city was so large in terms of the numbers of models, that we ended up rendering them as 3D particles rather than polys, and the same for all the trees and vegetation. Even the roads and cars were assembled this way with the ingenious programing of our TD Huang Gong. The end result being A very high resolution image of a major Chinese city, parts of which I had to pre-composite in photoshop. We rendered the huge frames using Maya with Arnold, and many plugins and internal programs.
Here are our 3D renderings of Suzhou, Nanjing, and Shanghai (after Liusi’s Treatment in the static scroll):

The city of Suzhou

The city of Shanghai
​I can only show a few movies here to give the viewer a sense of how vast this projects was – I’ve picked the Tibet - Languay  sequence, and the Suzhou sequence because it is just too time consuming to re-composite a huge static camera looping animation into a panning one. Here were the original paintings, then a panning version of the movies (the exhibition piece did not pan, but rather the sequences looped) – as the viewer was expected to walk along down the Yangtze seeing the animation unfold. As a backdrop to the Tibet animation – here is her static painting of Tibet region, many of the elements in which I had to paint out myself and replace with 3D animated version of people, birds, clouds, mists and even snow – all created with Maya and Arnold, using particles, dynamics, and even AE plugins as well as the flocking plugin for Maya like Myarmy. Even the tiny flags in were redone, and of course used cloth dynamics (as did all the character clothing) to indicate the strong wind. It is a shame that we did not render more of a close pass with dynamic camera moves to showcase all of the intense and detailed model work, but the camera positioning was restricted  the parameters established in the scroll itself, as was the style, mood and lighting.
Here is a close version of the first 2 of the four panels for the region (and the start of the entire scroll): 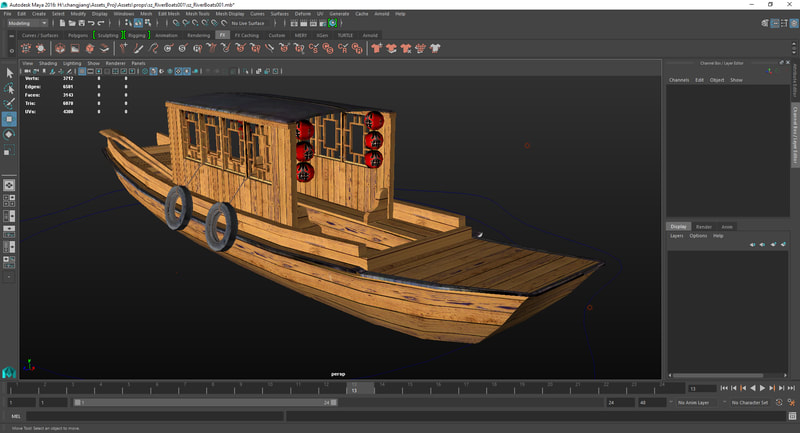 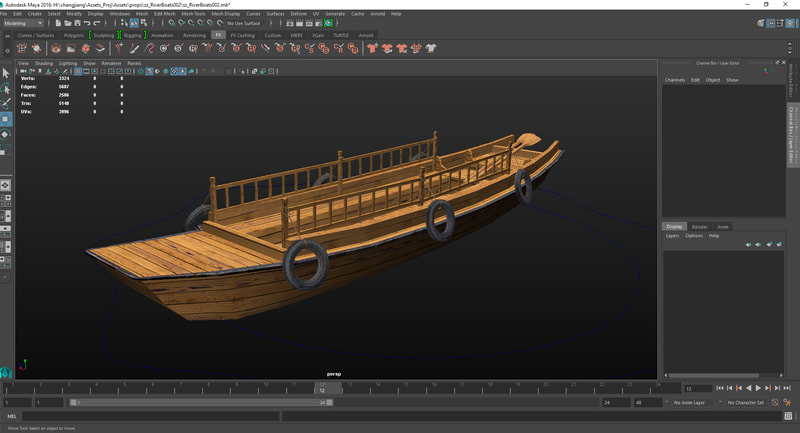 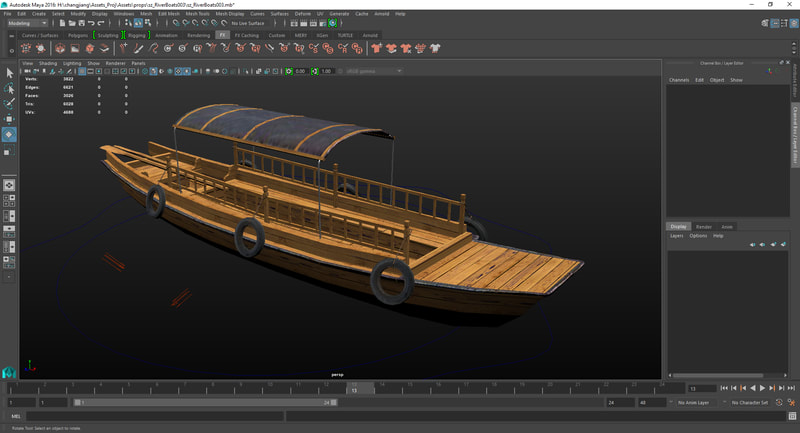 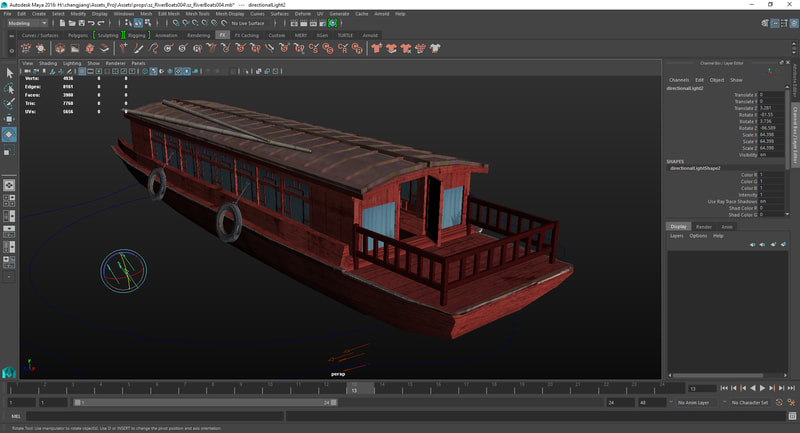 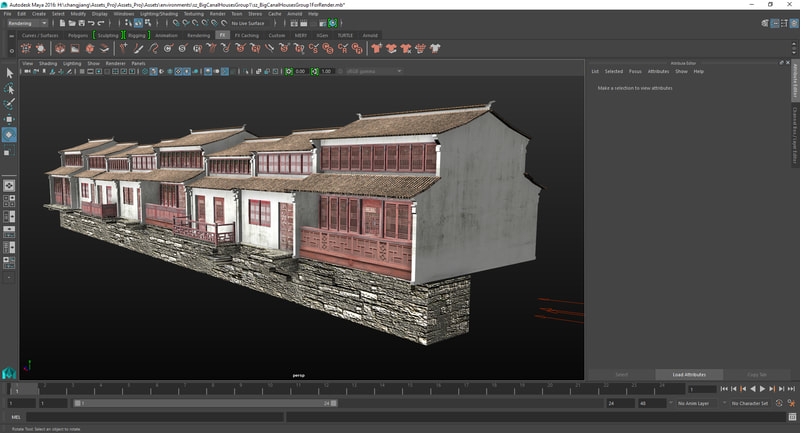 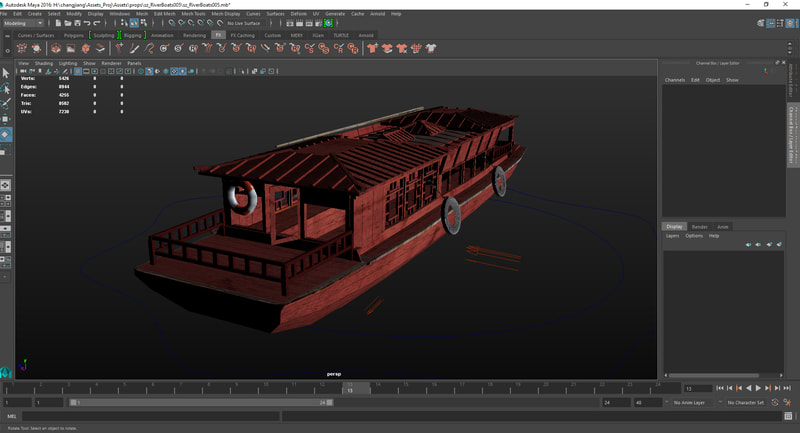 I had built these low poly  models for the Suzhou canals myself and wanted to render them into a more of a close up context for my demo reel canal scene rather than see them lost and wasted in such a long shot that was mandatory for the scroll itself, There was also a fantastic classical Chinese garden scene modeled that I will attack some time. 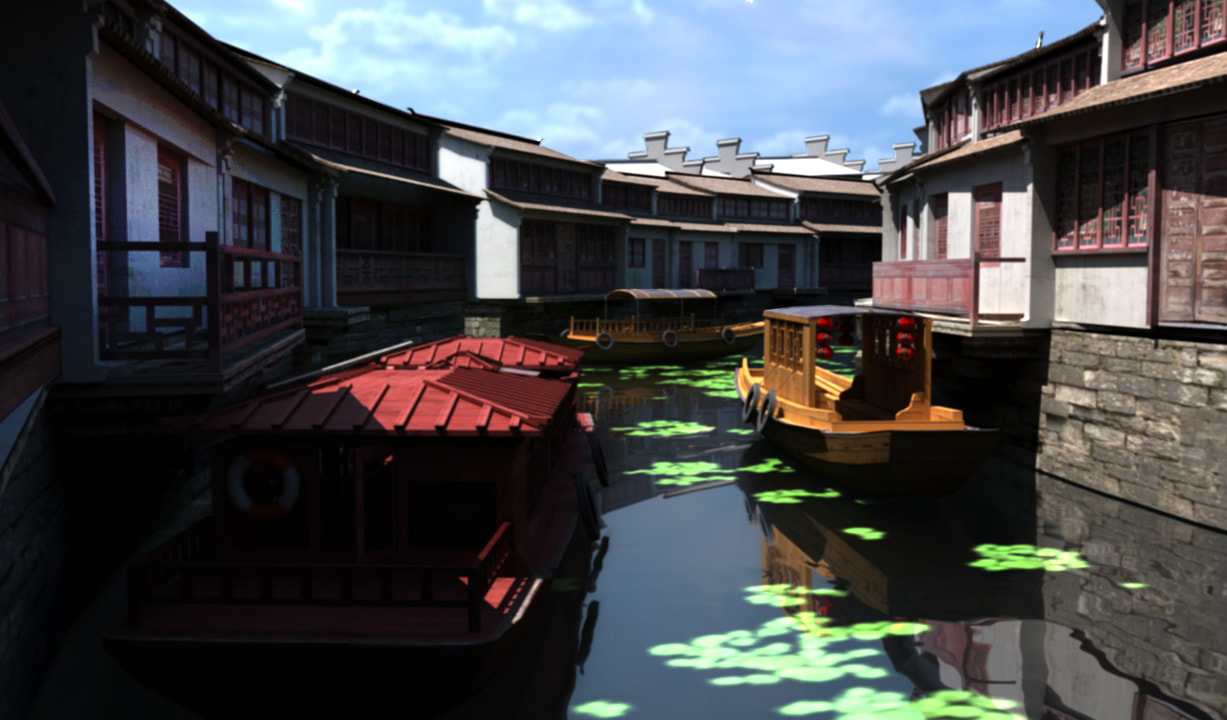